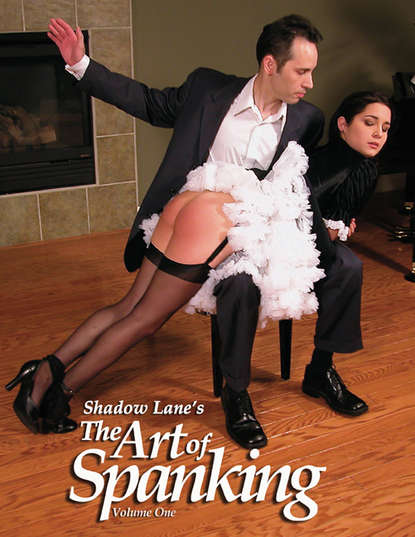 Shadow Lane’s The Art of Spanking Volume One: Pictorial Erotica for the Spanking Connoisseur

Shadow Lane presents an exquisite photo album depicting the art of spanking in the 21st century. A spanking video production company and publishing house since the late 1980’s, Shadow Lane is headed by Eve Howard, a former spanking model, editor of both Spank Hard and Stand Corrected magazines and author of the Shadow Lane novel series. Shadow Lane has always identified with the “romance of discipline” and this has long rendered its products of particular interest to female spanking enthusiasts chary of the harsher profile of contemporary BDSM. The photography in this soft cover book is wholly devoted to spanking perfection, ranging from the classically traditional to the evocatively fetishistic, with the emphasis on fully clad good looking man spanking enchanting bare bottomed girl, in the most popular American spanking position, over the knee. Departments include: the world’s most bewitching female spanking submissives, counter posed with their handsomest tops, a gallery of never before published Brian Tarsis spanking illustrations, girls spanked in uniform, cheeky views from the rear, nude spanking, clinical spanking, double spankings and women who spank women. Shadow Lane’s The Art of Spanking Volume One is a 64-page, all color portfolio of genuine corporal punishment erotica for the discriminating viewer of the whole spanking picture, including those meaningful expressions that say so much about the general attitude of a scene. This is not a book of disembodied bottoms, but of human beings with personality and heart, interacting in a fabulous action fetish that includes an entire sub-culture of its own. Many spanking people who discover Shadow Lane for the first time feel as though they’ve come home to friends. These charming images, along with Eve’s explanatory notes, which put the scenarios into a cultural perspective, will speak to the spanking enthusiast who knows deep down that there is absolutely no reason not to feel good about being into spanking in the 21st century. About the Author: A lifelong enthusiast, Eve Howard has been writing, editing and creating spanking erotica since the 1980’s. There are 10 previous volumes in the Shadow Lane series as well as a pictorial publication called Shadow Lane’s The Art of Spanking Volume One. Eve has also written, directed and produced over 170 spanking videos and has recently returned to the small screen as a performer in some her own productions. Designed to make people feel good, rather than guilty about being into spanking, Eve’s books suggest an irreverent alternative to the BDSM extremes portrayed in such novels as The Story of O. Eve was the editor of the beautifully designed Stand Corrected magazine, which raised the bar for spanking publications in the 1990’s. And for over 20 years, Eve’s company Shadow Lane has been one of the primary social organs of the real-life spanking scene, throwing annual gala events for fellow enthusiasts to come together and celebrate the spicy variation that has preoccupied them for so long. Eve lives with her husband Tony and their two cats in Las Vegas.